I watched  this terrific film last night on Netflik with my transvestite partner and I would  recommend it to anyone with an interest in Transgender or Cross Dressing to watch .

Despite the fact its in French with English subtitles this is well worth the watch as its a wonderful story. It starts with a Cis female Claire the best friend of  Laura who is mortified when Laura dies.  Claire is the wouldbe  the lesbian partner that Laura never married instead both married men. Laura leaves a widower and a young baby oneday Claire decides to visit the recently widowed man (Romain Duris) and finds a surprise when she enters the building.  As the story progresses  she  develops a close bond with him, despite his  compulsion to dress like a woman.

Personally for someone whops been through it all the story is very familiar such as  the family shock as they find the guy in drag,  also the Claires initial negative reactions such as calling him a sick  pervert  and suggesting he gets counselling. It takes a really lovely twist when she is disappointed he actually takes up counselling and stops dressing haeres a strong hint shes a female tranny admirer.

I won’t spoil it all but its really entertaining despite the slow start plus its got an interesting twist at the end .

There’s lots of funny incidents like the guy in the cinema who puts his hand on Viriginas knee. Virgina being the female name that Lauras ex husband is given by his female new best friend. 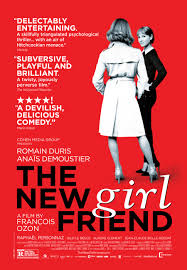 What the Critics Said About the film …

by Rex Reed of The Observer

Featuring winning performances from Romain Duris and Anais Demoustier, The New Girlfriend is one of Ozon’s most successfully transgressive titles over the last decade, and will hopefully be recuperated as such.

Ozon, perhaps not entirely purposely, addresses the very timely issue of trans and non-binary gender identity, yet he does it within the framework of his usual style and preoccupations – and shortchanges neither.