Why dress up a french Maid ??

One question I have often wondered is why is it some people dress up as a French maid. While for others, it leaves them well cold.  The answer is a lot to do with role play, a desire to express submissive role normally in sex foreplay.

What is it about the why french maid?  At root is simply means a maid from France. Because in Nineteenth-Century Britain it was fashionable among the aristocracy to have a “Lady’s Maid( the . .personal maid who was mistress of the household) who was french.  They would travel with and attended their employers in public and before guests, thus personal appearance was highly prized in a lady’s mad.

Apparently, the craze was so great that not enough french women could be found so instead they hired English women who spoke french and even gave them french names.This occupation became for servants a route to a highly lucrative post as a personal servant to the female mistresses of the house.  Obviously better than lowly scullery maid or kitchen servant.
So a more attractive servant could quickly rise than their more homely colleagues.  Those who were french maid’s not only had the attraction of coming from what was considered a highly sexualised country but also had personal access to the mistresses boudoir and intimate attire. It was not surprising that this role was considered sexually desirable. 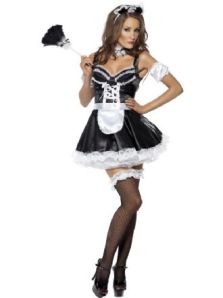 How the Maids outfit evolved

As Wikipedia helpfully points out the outfit itself French maid refers to a strongly modified style of servant’s dress that evolved from typical maids’ black and white afternoon uniforms of the nineteenth century.  Not to mention their later use by stereotypical soubrette characters in burlesque dramas and bedroom farces.

The designs of the French maid dress can range widely from a conservative look to revealing.  It is often used in cosplay, sexual roleplaying, and fetishism.  Depending on design details some forms can be classified as lingerie, The most common french maid has much higher hemlines and lower necklines than the original nineteenth-century uniforms had !!

French maid costumes also feature in mainstream media from time to time. Notable films include: Joanne Whalley in The Man Who Knew Too Little (1997)
Colleen Camp in the murder mystery spoof Clue (1985) and numerous others.